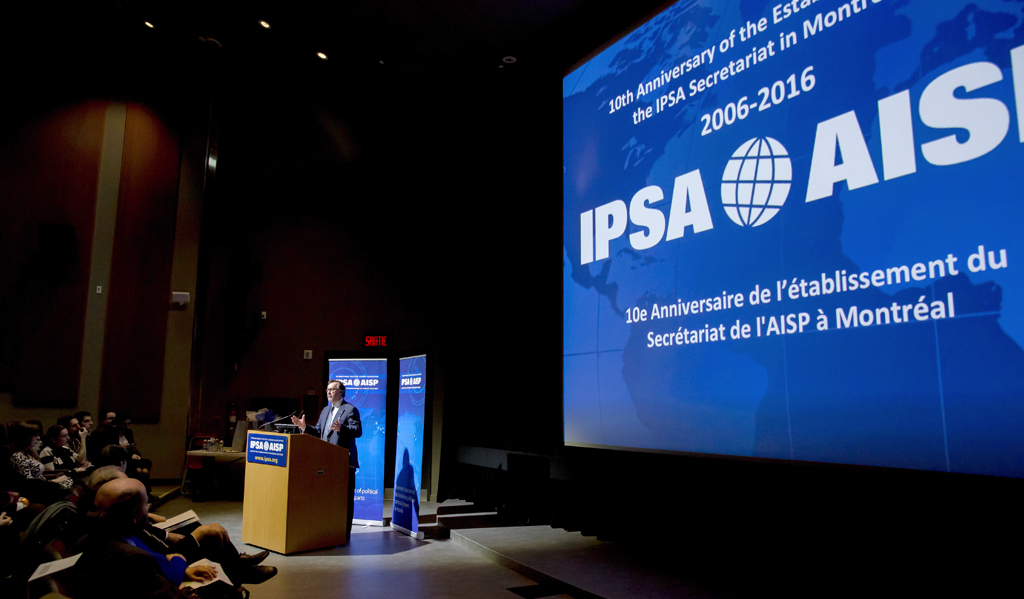 Yasmeen Abu-Laban 1, The University of Alberta

In November 2019, the International Political Science Association (IPSA) marked its 70th anniversary with a commemorative celebration and conference in Paris. Canada was specifically honoured at this event because when IPSA was founded in 1949 under the auspices of the United Nations Educational, Scientific and Cultural Organization (UNESCO), the CPSA was one of four founder members.  The CPSA along with the American, French and Indian associations of political science joined to become IPSA’s first collective members.  Prior to the advent of IPSA, communication between political science organizations was limited to the point of being practically non-existent (Boncourt, 2009: 1).  Speaking to the development of the profession globally, the number of collective members in IPSA steadily increased over the decades to now number 58, with many formed thanks to efforts of IPSA (Coakley and Trent, 2000:11).  In this the work and efforts of founding collective members like CPSA were critical to the success of IPSA (Coakley and Trent, 2000: 40).   As such, IPSA’s 70th anniversary offers an important occasion to celebrate and reflect on the profession over time, at critical historical junctures and in relation to pressing global challenges.  It also offers a moment to reflect on and commemorate the international turn in Canadian Political Science which is so interconnected with the IPSA story. 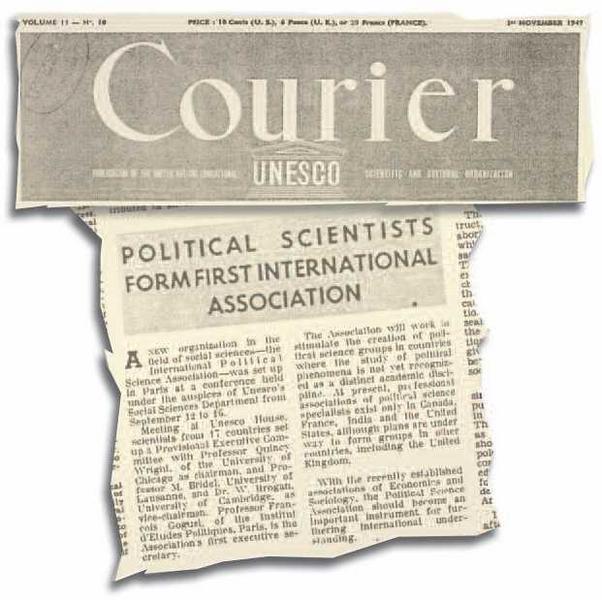 Formed in 1945, UNESCO was critical to the internationalization of science, social science, philosophy and the humanities, as well as arguably being one of the main global actors encouraging standards, scholarly exchange, as well as disciplinary specialization through meetings which might build international understanding.  Early discussions reported by UNESCO make evident the relevance of the organization’s emergence in the wake of the human carnage wrought from World War Two, the more hopeful articulation of human dignity advanced through the 1948 Universal Declaration of Human Rights adopted by the UN General Assembly, and the belief that scientific advancement could lead to human betterment.  Hence in its 1948-1949 communications the proclamation (reflecting on the gendered language of the day) that “Man has now reached a stage in his history where he can study scientifically the causes of the tensions that make for war,” is literally juxtaposed with reflections that UNESCO “continues its work on the methods and techniques in Political Science” including “effective methods of international conferences” (UNESCO Courier, 1948-1949:5).

The year 1949 marks when UNESCO began the work of assisting “three of the principal social sciences (economics, sociology and political science) to set up international associations—for the first time in their history.” (UNESCO Courier, 1948-1949: 5).  It was out of these efforts that IPSA, the International Sociological Association (ISA) as well as the International Economic Association (IEA) were created.  These organizations went on to reflect and survive the tumultuous politics of the Cold War and continue to thrive in the twenty-first century. The CPSA and its members played an important part across more than one association precisely because in its early years, the CPSA was really a multidisciplinary social science association especially across politics, economics and sociology, and also because CPSA members came to actively embrace internationalization in conjunction with building the social sciences in Canada.  In 1949, following the recommendations of a special committee set up by CPSA to deal with relations between CPSA and UNESCO’s efforts at international conferences, CPSA joined both the IEA and IPSA, naming Harold Innis as delegate for the IEA meeting, and C.B. Macpherson as delegate for the IPSA meeting (Annual Meeting of the Canadian Political Science Association, 1949: 413).  It is interesting that the CPSA also tried to assist in finding a Canadian sociologist who might attend the ISA meetings (Annual Meeting of the Canadian Political Science Association, 1949: 413) and eventually CPSA also made an application to formally join the ISA in 1950 (C.B. Macpherson, 1950: 424-425.)

Recalling that after it was formed in 1912, the mission of the CPSA as advanced by the first President Adam Shortt was to understand Canada and to contribute to the world (Shortt, 1913), it is not at all surprising that members of the association embraced working with IPSA, IEA and ISA starting in 1949. Minutes of the CPSA Annual General Meetings from the 1950s are found in The Canadian Journal of Economics and Political Science the predecessor of The Canadian Journal of Political Science.  These make evident that there were attempts by sociologists and anthropologists to gain better representation through a separate chapter in CPSA (Annual Meeting of the Canadian Political Science Association, 1955: 374) and rumblings from economists opposed to even the name of the CPSA for privileging political science, foreshadowing the formal split between political science and economics that was to come in 1967 (Annual Meeting of the Canadian Political Science Association, 1962: 436-437).  But throughout all this working with UNESCO’s efforts to internationalize the social sciences was positively supported as a seemingly natural extension of CPSA’s mission.

Internal correspondence of the CPSA executive in the 1950s, preserved at Library and Archives Canada, also makes clear that ensuring representation of Canadian academics in the meetings and governance of the UNESCO-inspired international associations assumed a routine place in the duties of the CPSA President and Executive just as ensuring that the annual national conference of the CPSA was staffed and would be a success.  In fact, when pathbreaking political economist Harold Innis passed away prematurely in 1952, palpable expressions of grief were interspersed with a concern for ensuring there would be a replacement for the work Innis had been undertaking with the IEA (“Current Correspondence with President”; “International Political Science Association (1955, 1957-65)”).

As a consequence of all these actions, it is fair to say that the CPSA was firmly part of the unfolding of the post-World War Two liberal international architecture.  Moreover, Canadian academics exhibited a global outlook long before the 1990s when “globalization” became a buzz word, and university administrators became fixated on developing indicators of international excellence in their staffing and reputations.   This continued after 1967 when CPSA came to be an association explicitly devoted to political science since other Canadian associations formed specifically for economists and sociologists.

One might fairly say then that IPSA’s founding provided a major rallying point for the international turn in Canadian Political Science.  However, it was also the work of Canadian political scientists in IPSA whose presence and galvanizing activities propelled and developed the organization further, in the process advancing the international exchange and internationalization of the profession.  This point is made visually obvious in looking at the Cold War era 1979 IPSA Executive Committee photo from the 11th World Congress of IPSA, held in Moscow.  Featured in it are Canadian political scientist John Meisel (who was founding editor of both IPSA’s flagship journal International Political Science Review as well as founding editor of The Canadian Journal of Political Science) and Canadian political scientist John Trent (who served as IPSA Secretary-General from 1976-1988).

The international turn continued in more recent decades when Quebec-based Political Scientist Guy Lachapelle broke the record for longest-serving Secretary-General of IPSA.  Thanks to his work, Lachapelle’s tenure from 2000-2020 also coincided with a period of exceptional organizational growth for IPSA and the IPSA Secretariat (Boncourt, 2009: 32). Since 2006 the Secretariat has been located in Montreal, at Concordia University. 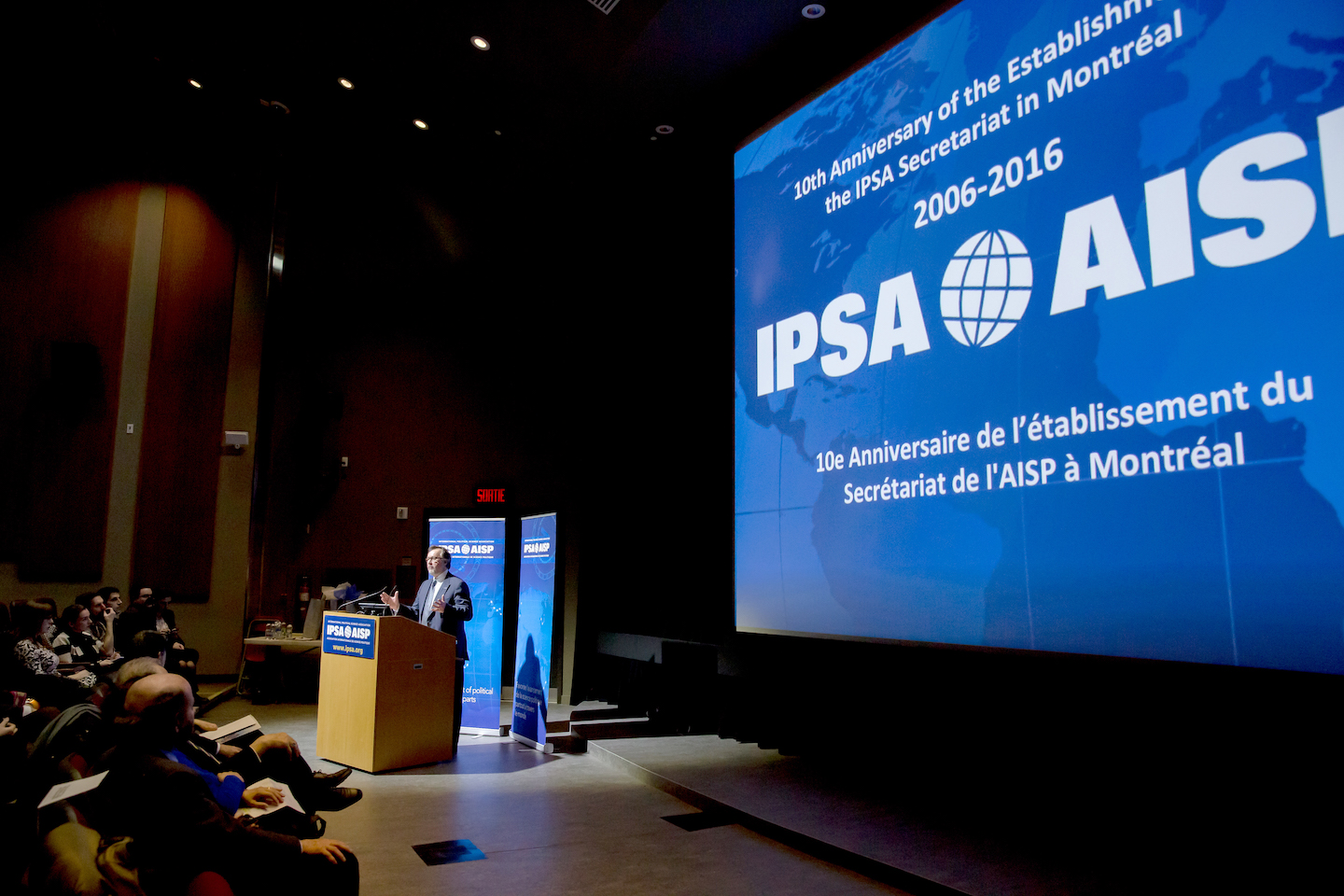 After the formation of la Société Québécoise de Science Politique (SQSP) in 1963, CPSA and SQSP came to eventually work jointly in interfacing with IPSA’s governance and elections.  This represents one important avenue of collaboration and exchange between the CPSA and SQSP.  Over the decades, numerous Canadian and Quebec political scientists have served as representatives to IPSA Council including Dale Thomson, Léon Dion, Gérard Bergeron, Alan Cairns, Blema Steinberg, André Vachet, Lloyd Brown-John, Peter Russell, Caroline Andrew  and more recently Stéphane Paquin, Pascale Dufour, Stephen McBride, Richard Johnston, Bill Cross, Kiera Ladner and Mireille Paquet.  Many have been elected to serve on IPSA’s Executive Committee since 1949, starting with Crawford B. Macpherson, and including Jacques Hodgetts, André Donneur, Maureen Covell, Leslie Pal and Linda Cardinal.  Canada provided IPSA with a President, the late Jean Laponce, who served from 1973-1976, following his service to CPSA as President in 1972-1973.  As well in 2019 Canadian political scientist Daniel Stockemer was appointed as co-editor of International Political Science Review. 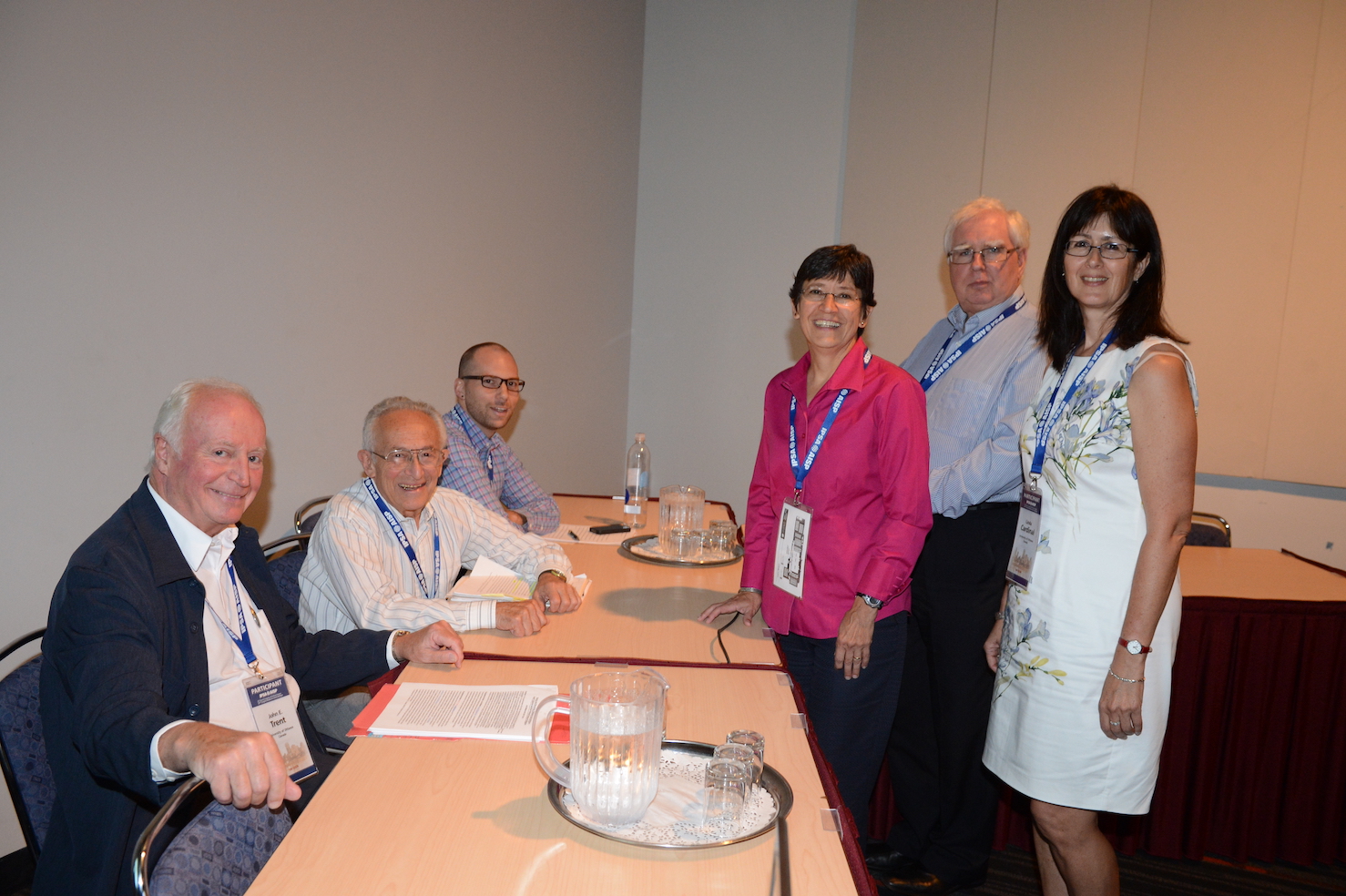 The Profession and Challenges in Our Turbulent Time

The relationship between IPSA and CPSA has deep roots and no doubt will be important in the years ahead if CPSA remains true to its mission of understanding Canada and contributing to the world, and Canadian Political Science further builds on its international turn. But there are new global challenges facing political scientists at this historical juncture and therefore there are choppy waters to navigate for the profession as a whole.  Indeed, a major theme at IPSA’s  70th anniversary conference event, sponsored jointly by IPSA and the French political science association and held at the Sorbonne on November 22, 2019, was that contemporary political science takes place in “turbulent times.”  One indication of this was a separate panel devoted to the discussion of new threats to academic freedom in the face of democratic erosion.

While the critiques of the scientific study of political life have been well established, in an age of “post-truth politics,” amplified by social media and new technologies, political scientists are confronted by distinct ways in which lack of understanding of others and hate can spread in ways that were never imagined in 1949.  The digital age and political science also present new challenges to how we study politics and teach, a theme addressed in a new book launched at the 70th anniversary event edited by IPSA President Marianne Kneuer (Germany) and former IPSA President Helen V. Milner (USA) entitled Political Science and Digitalization:  Global Perspectives.

More broadly, it can be observed that unlike 1949, when much activity was directed toward the building of a new liberal international architecture, we live in a period of its potential dismantlement and an uncertain future.  In delivering the keynote speech at IPSA’s Paris 70th Anniversary celebration, Michelle Bachelet, the United Nations High Commissioner for Human Rights, reflected on the relevance of multilateralism to protect and advance human rights, especially given that many protests occurring in different parts of the world today share in calling attention to injustice. 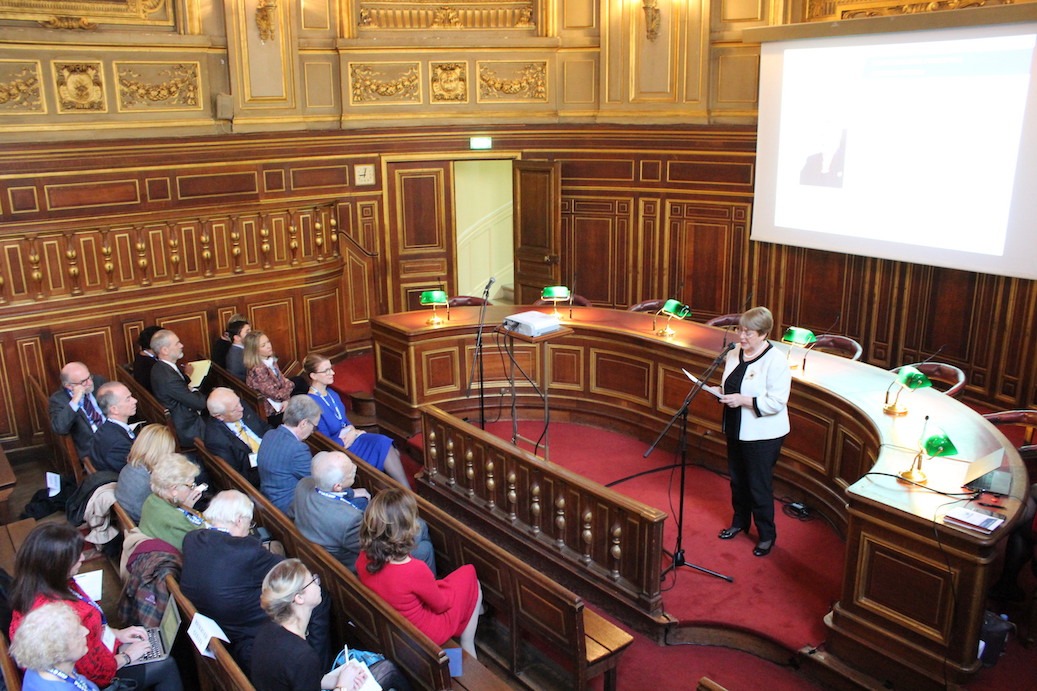 In studying politics, and in the profession, Canadian political scientists draw strength from the historic relationship with IPSA which has allowed for new possibilities and interactions in an interdependent world.  IPSA’s celebration and commemoration of the past 70 years is also about CPSA, specifically honoured as a founding collective member at the 70th anniversary celebration, and whose support and work has helped make IPSA a success.  In this, the relationship between IPSA and CPSA formed so long ago is in essence now mutually constitutive in meeting each organization’s founding goals.  As such, the strength of this relationship provides a bulwark for cooperatively navigating the challenges which lie ahead in politics and for the study of politics. 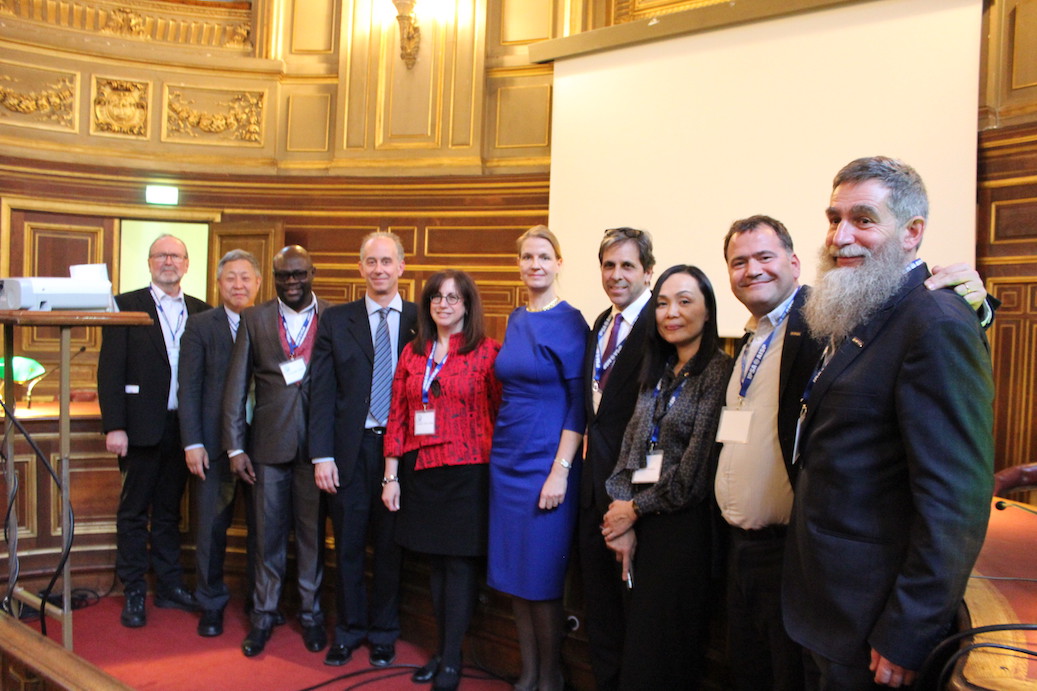 Boncourt,Thibaud. 2018. “What ‘Internationalization’ Means in the Social Sciences:  A Comparison of the International Political Science and Sociology Associations.”  In Johan Heilbron, Gustavo Sora and Thibaud Boncourt (eds.), The Social and Human Sciences in Global Power Relations Cham:  Palgrave Macmillan, 2018 :95-123.

1 For assistance at various stages in undertaking the research and writing for this posting I thank Margot Chalborn, Haluk Dag, Silvina Danesi, Michelle Hopkins and Guy Lachapelle.